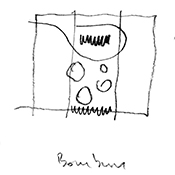 Ave Fénix Fire Station The project is developed on a plot that had suffered from a tragic fire. It was conceived as an urban landmark, not only to function as a fire station but also a leading training academy and center for the community. The building’s exterior façade is a solid aluminum box with glass strips to create a random light display at night. This construction rises up from street level and creates an open space to the public, revealing the fire station’s forecourt and parking bays. An interior courtyard divides the various operational areas into two zones for simultaneous use.
The firemen’s activities take place on the building close to the street; the supervision center, training rooms and fire-fighting resource center (open to the general public) are located to the rear. This creates intersecting views for both types of users across the patio, combining each zone without mixing them. A drop-shaped stairwell clad in red glass contains the main staircase and symbolizes the fire, while several other opening in the roof provides ventilation and lighting for the building’s interior.